A Night on the Town in New York, New York Dropping anchor in Bellport after a smashingly successful revival on Broadway, On the Town is a bold and brassy musical comedy about three sailors on 24-hour shore leave in New York City during World War II. Beloved for both its soaring score of Leonard Bernstein songs like “Come Up to My Place,” “Lucky to Be Me,” “I Can Cook Too,” and the iconic, “New York, New York,” and its timeless themes of youth and exuberance, On the Town is a tale about seizing the day and living life to its fullest. 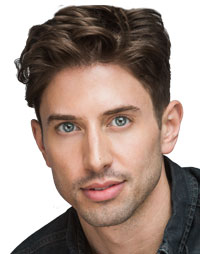 Featuring Broadway Star, Nick Adams, as Gabey Music by Leonard Bernstein Book and Lyrics by Betty Comden and Adolph Green Based on an Idea by Jerome Robbins Learn More... On the Town (musical) - Wikipedia On The Town Performance Tony Awards 2015 - YouTube

Brought to you by